With skyrocketing real estate costs, businesses are opting for smaller employee work spaces like cubicles and group desks. That’s why you don’t have your own office anymore.

Even 10 years ago, in a midlevel position, you often got your own private office with lights you could control, a big window, and a door to close.

These days, with the “hoteling” trend, desk shares, and working from home, the traditional office is still reinventing itself, with the latest being long desks in a wide-open space. But cubicles remain. I must wonder why.

Recently, I organized a cramped cubicle for a male employee who stands 6’3”. It’s so tight in there, he cannot stretch out his legs, and has to crane his neck back while opening his cupboard door so that he doesn’t whack his head. When a colleague comes to the half-wall entrance, he has to swivel his chair a full 180 degrees to see who it is.

He is quite uncomfortable in this space.

It takes more courage, than most people have, to ask during a job interview: “What does my office look like? How much square footage is it?” Once you are hired, you must accept wherever the employer assigns you.

The cubicle was invented by Robert Propst, an office-furniture company designer. When they debuted his concept of walled-in private space in the early 1960s, it was a time when individual office space was shrinking.

Instead of long tables, shared desks, and wall-less spaces, he invented 6-by-6 square cubicles to give office workers more privacy through semi-enclosed workspaces, thinking it would lead to a more efficient, happier employee. His design was trying to replace open spaces, but we now have both designs.

And both are noisy, distracting, lack privacy, and frustrate employees.

The 1960s cubicles accommodated more employees joining the workforce, in particular women, while minimizing space and companies’ rental estate costs. But so-called Cube Farms make most people feel caged in, especially if there’s no sunlight. Some employees may goof off since no one can see what they are doing.

Remember the disrespected, mumbling character, Milton, in Office Space? He was let go five years ago and no one even told him! So he kept going into his pod, surrounded by boxes, stacks of paper, and clutter, seriously unhappy with being moved every few months into another cramped space.

So where does this leave us?

In this modern business world, our society has shifted to activity-driven, employee perks (foosball anyone?), and open spaces for collaboration.

Office designers are combatting the lack of sunlight and privacy with open spaces, and “breakout rooms.” Companies build spaces to accommodate different work tasks, such as a private room with comfy couches for brainstorming, or a closed off booth for private phone conversations.

Whatever we do, let’s retire cubicles. 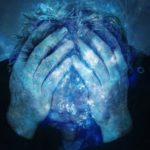 Working at Home During COVID-19 Outbreak

Being in close proximity to sneezing, coughing passengers is more alarming than usual right now for employees travelling on public transit. Additionally, being in close quarters and contact with colleagues […] 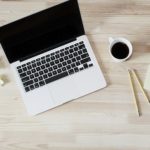 You go to work every day, and there’s money for bills and food. It’s a good time of year to ask:  are you happy, or just satisfied? I believe people […] 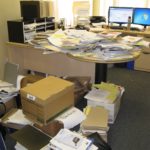 What Paper Piles and Digital Disorganization Cost You

Some people embrace clutter. They love their messy office. They know exactly what’s in each and every one of their 27 piles of paper littering the desk, floor, windowsill, and […] 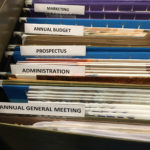 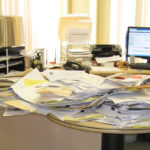 Is Your Desk Messy or Organized?

I lose my mind when my desk starts to get messy. I can’t think, or focus, especially with projects piled up, dancing for my attention. I know I’m not alone […] 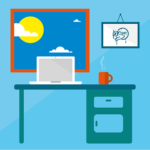 Is Your Work Style Early Bird or Night Owl?

Each workday, Night Owls drag themselves out of bed to arrive at the office on time, while Early Birds fight taking a nap in the early afternoon. Wouldn’t it be […] 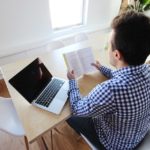 Making Your Office Yours

As a new employee, you probably walked into your office or cubicle, and got right to work. After logging into your computer, you may have checked out the office supply […]